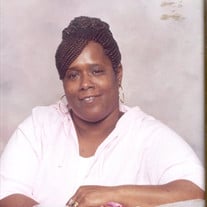 Obituary Mrs. Tyrees Lois Stukes Mellette, 45, passed away on Sunday, May 5, 2013 at the Medical University of South Carolina in Charleston, SC. Mrs. Mellete was born in Harlem, New York on December 9, 1967 to the late Freddie E. and Patricia... View Obituary & Service Information

The family of Tyrees Lois Mellette created this Life Tributes page to make it easy to share your memories.