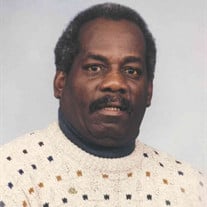 Obituary Deacon Roosevelt Pearson was born on July 22, 1944 in Sumter County to the late Marion and Emma Dow Pearson.He attended the public schools of Sumter County and was a graduate of Lincoln High School Class of 1964. He enlisted in the... View Obituary & Service Information

The family of Roosevelt Pearson created this Life Tributes page to make it easy to share your memories.

Send flowers to the Pearson family.