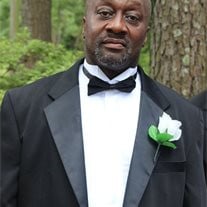 Obituary Reginald "Reggie" Fulwood was born January 9, 1967 to Willie Fulwood and the late Estelle Samuel Fulwood in Sumter County, SC.Reggie was educated in the public schools of Sumter School District 2 and was a 1985 graduate of Mayewood... View Obituary & Service Information

The family of Reginald Reggie"" Fulwood created this Life Tributes page to make it easy to share your memories.