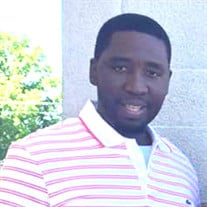 Joey Terrell Gibson was born March 13, 1983, in Sumter, SC to Carolina Gibson and the late Joseph Arthur and was nurtured by Harvis McGee Jr. Joey was educated in the public schools of Sumter, SC. He was the owner of Go Hard Hauling Company.... View Obituary & Service Information

The family of Joey T Gibson created this Life Tributes page to make it easy to share your memories.

Send flowers to the Gibson family.