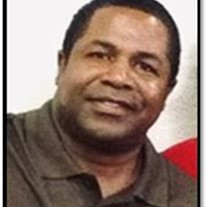 Obituary Please Click Link Below for the Live Graveside Services for Mr. Gregory Mobley on Saturday, January 2, 2021 @ 1:00 PM https://www.hdezwebcast.com/show/gregory-mobley-sr Gregory Louis Mobley was born on September 11, 1957 in Wiesbaden, Germany, a son of the late Willie Louis Mobley and Frances Thompson Mobley. As a military dependent, Gregory attended schools in Virginia, Alabama, California, and Okinawa, Japan. Gregory graduated from Hillcrest High School in Sumter, South Carolina, where he was an outstanding football player. He served in the United States Navy for several years, received an honorable discharge, and attended Francis Marion University. Gregory worked in retail management in various locations for many years prior to returning to Sumter. As a young man, Gregory accepted Jesus Christ as his Lord and Savior. He was passionate about his faith and continued to read and study the Bible until his death. He had a profound gratitude for the cross and salvation offered to him through Jesus Christ. Gregory married Valerie Ellis in 1981. To this union, two daughters were born. He later married Sherry Rankin, a union which produced his only son. Gregory deeply loved his daughters and son, and constantly spoke about the love he had for them and for his new granddaughter Arden. In addition to his parents, Gregory was preceded in death by his son, Gregory, Louis Mobley, Jr. and brother-in-law, Calvin Bronner. He departed this life on December 23, 2020 at his residence in Sumter. Gregory is survived by his daughters Lindsay Mobley Hall (Rico) of Charleston, South Carolina and Allison Mobley of Summerville, South Carolina; four sisters: Vanessa Tolbert (Ivee) of San Jose, California; Valarie Saunders (Carlton) of Los Gatos, California; Deborah Everly (George) of San Jose, California; and Pamela Bronner of Brentwood, California; one brother, Timothy Mobley (Saundra) of Atlanta, Georgia; a granddaughter, Arden Grey Hall, and a host of nieces, nephews and other family members. May he rest in peace.     Funeral Services Will Be Held Saturday, January 2, 2021 @ 1:00 PM St. Lawerence Cemetery, West Oakland Avenue, Sumter, SC  To send flowers to the family or plant a tree in memory of Gregory Louis Mobley, Sr., please visit our floral store.

The family of Gregory Louis Mobley, Sr. created this Life Tributes page to make it easy to share your memories.

Obituary
Please Click Link Below for the Live Graveside Services...

Send flowers to the Mobley, family.