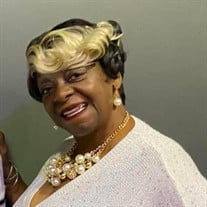 Dolores Ann Hardy, affectionately known as “Lois”, to some, and playfully, “Miss Patti Labelle”, was born to the late Marie Lewis Burden and Buford Hagan on April 17, 1946, in Brooklyn, New York.  She entered heaven’s gates on March 1, 2022. Dolores Ann Hardy was a devoted daughter, mother, sister, aunt, cousin, caregiver, and friend. Dolores grew up in the public and Catholic school systems of Brooklyn, New York. She was a member of the Order of the Eastern star.  She was a retired caregiver.   Dolores Ann Hardy was fearless. She was often described as a rebel. There was no one too small or too big that she did not believe she could help or encourage. She protected everyone she held dear. Dolores was a woman of good character. She was influential and was able to encourage and steer others in the way that they should go. She had the godly heart of a woman which made her so treasured. She was clothed with strength and dignity and has often laughed at those days when she has experienced hardship and pain.  She often spoke with wisdom and, most of the time, understanding.  Was she perfect? No.  But throughout her life she has exemplified love, joy, peace, patience, kindness, goodness, gentleness and self-control, when it was needed the most. That is a reflection of a heart that is ruled by God’s own spirit. In addition to her parents, she was preceded in death by a sister, Elizabeth Pickett, her dad, Willie Burden, Sr and a special son-in-law, Carl Lowery. In 1964, Dolores married the love of her life, the late Harold Dwight Hardy Jr.  Through this union she bore their three awesome children, Wauneka Shereane Hardy “Skeeta”, of Bronx, NY. Sean Rashid Hardy of Sumter, SC., and Laila Kowalai Hardy “Pete”, of Raleigh, NC.  She later bore a fourth child, the awesome Aiyda Sydari Corbin “Vee”, of Sumter, SC, by the late Hugh Corbin.  Through her selfless act of love and adoration for children, she later adopted three amazing children: Aida Jamille “AL”  Zuell, Sonali Khalil Hardy, and Shylei Hardy “Jazell”.  She was also tasked and blessed with the guardianship of Rashied Ally Rahming, from her very best friend, the late Gayle Rahming. The loved ones she has left to cherish her memories are her eight children, twenty-five grandchildren, fifteen great-grandchildren; four sisters, Rose Ali, Barbara Walls, Janet Murray, and Claudia Hagan; two brothers, Willie Burden, Jr, and Demetrious Burden, and a host of cousins, nieces, nephews, future son-in-law, Kevin Pattishaw, and great friends.

The family of Dolores A Hardy created this Life Tributes page to make it easy to share your memories.

Dolores Ann Hardy, affectionately known as “Lois”, to some, and...

Send flowers to the Hardy family.