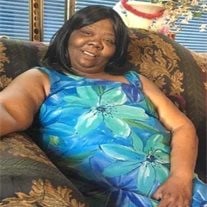 Obituary Please Click Link Below for the Live Funeral Services for Ms. Damita Jones Wednesday, January 13, 2021 @ 11:00 AM https://www.hdezwebcast.com/show/damita-jones Damita Euline Jones was born March 23, 1961 in Bronx, New York to the late Eddie Jones, Sr. and Amanda Oneather Jones. Damita was educated in the public schools of Bronx, New York.  Damita was employed by Lehman College and was a security guard for 8 years.  Additionally, after relocating to Sumter, SC, she was employed at Pilgrim’s Pride for 13 years. Damita (Meeda) was a beautiful person, inside and out.  She loved to crochet, shared what she could to people less fortunate than herself.  She enjoyed crafts, selling oils and creating things for women to come together as sisters.  She was a jewel herself.  She adored her sons, Anthony, Edwin and Derrick.  Her grandchildren adored her and she definitely adored them.  They brought a bright bold smile upon her face. She enjoyed her sisters, brother and friend alike. Damita Jones departed this earthly life and gained her heavenly wings on Tuesday, January 5, 2021 at Lancaster Health and Rehabilitation Facility in Lancaster, SC. Damita leaves to cherish her precious memories three children; her son, Anthony Jones of New Jersey, Edwin Jones of Columbia, SC and Derrick Davidson of Sumter, SC; seven grandchildren; Najae Jones, Anthony Jones, Hayden Jones, Kobee Jones, Braxton Jones, Anastasia Davidson and Jasmyn Davidson; one brother, Eddie (Jennifer) Jones, Jr. of Sumter, SC; four sisters; Clealia Jones of Brooklyn, New York, Villia  Jones, Vivian (Carlos) Fernandez, Cynthia Jones-Wright all of Sumter, South Carolina. Special friends; Wayne Black, Patricia Stukes-Burgess, Cynthia Jackson and Terral Murray; and a host of other relatives and friends. In addition to her parents, she was preceded in death by one sister, Andree Davis.  To send flowers to the family or plant a tree in memory of Damita E. Jones, please visit our floral store.

The family of Damita E. Jones created this Life Tributes page to make it easy to share your memories.

Obituary
Please Click Link Below for the Live Funeral Services...

Send flowers to the Jones family.