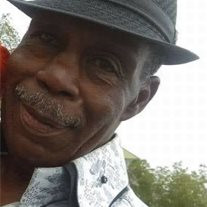 Obituary Christopher “Chrit” Davis was born February 6, 1956 in Baltimore, Maryland to the late Marie Davis Player and Jesse Irving. Chris was educated in the Sumter County School System and graduated in 1974 from Mayewood High School. At an early age, he accepted Christ into his life and was baptized at Mulberry Baptist Church. After graduating from high school, Chris enlisted into the United States Army Corp, where he proudly served until being honorably discharged. Chris was employed with several companies throughout his lifetime. His love as a professional was that of a painter. Affectionately knowing as “Chrit”, he enjoyed spending time with his family and friends, especially during family reunions and holidays. In addition to his parents, he was preceded in death by his sister, Thomasina Player, two special aunts who helped raised him: Vernease Davis and Mattie Corbett; four additional aunts and one special cousin, Don Davis. He departed this life on Monday, August 10, 2020 within his home in Gable, South Carolina. He leaves to cherish his memories, three sons, Tarba Davis, Jermaine Davis and Sterlin Davis; a daughter, Marjetta (Demarcus) Butler; three brothers, Sherman, Nolan, and   Larry Player, four grandchildren: DaQuante’ Kind, Keanndria Davis, and Davien and Dayton Butler; two aunts, Gardenia Walker and Roberta Emerson; three cousins who were raised like brothers: Leon Walker, Dean Walker, and Steven Jones; and best friend: Mitchell Williams and a host of  nieces, nephews other relatives and friends. A face mask/covering will be required while attending all services and viewings. To send flowers to the family or plant a tree in memory of Christopher "Chrit” Davis, please visit our floral store.

The family of Christopher "Chrit” Davis created this Life Tributes page to make it easy to share your memories.

Send flowers to the Davis family.