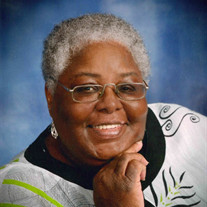 Obituary So when this corruptible has put on incorruption, and this mortal has put on immortality, then shall be brought to pass the saying that is written: "Death is swallowed up in victory." "O Death, where is your sting? O grave, where is your victory?" (1 Corinthians 15:51) On May 6, 2017 Carolyn Jean Burns left this world to put on her robe where she could worship day and night...she became one of "These Are They" that she sung about.Carolyn was born November 9,1955 in Detroit, Michigan to the late Deacon JC and Mary Thomas. "Carolyn-Jean" as she was affectively called accepted Christ at the age of 12 years old at Second Timothy Baptist Church in Detroit, Michigan; and in the Spring of 1976 she rededicated her life to the Lord at Saint City COGIC in Romulus, Michigan where she served until relocating to South Carolina and becoming a member of Grace Cathedrial COGIC in Sumter, SC and later at Jehovah Missionary Baptist Church in Sumter, SC where she sowed in the ministry until reaching her heavenly designation.Although; Carolyn received her Bachelor's Degree from the University of South Carolyn and a Master's from Webster University, her greatest accomplishments was what she did for Christ. Even though she never had children of her own. She was very influential in establishing youth ministries and counseling with young adults. Her Godly wisdom and faith made the task much easier. She along with others believed that the youth of JMBC should have a place to worship. She assisted in the vision along side Pastor Ricky and First Lady Sylestine Simmons and established the Blue Print- A New Generation Fellowship.Though her body may be absent from this world she leaves a host of memories to be cherished by the ones she loved and touched.Carolyn was preceded in death by her parents.Carolyn departed this life on Saturday, May 6, 2017 at Palmetto Health Tuomey in Sumter, SCShe is survived by two sisters, Catherine Thomas and Patricia Thomas of South Carolina; four brothers, Alphonso (Rose) Burns of Michigan, Carl Thomas of North Carolina, Timothy (Danielle) Thomas of Alabama, Alexander (Thelma) Thomas of Michigan; eleven nieces and nephews, five great nieces and nephews, seven godchildren, and a host of aunts, uncles, cousins, and church family to cherish her memories. Service Information When Friday, May 12th, 2017 7:00pm Officiating Pastor Marion H. Newton Location Jehovah Missionary Baptist Church Address 803 S. Harvin Street Sumter, SC 29150 To send flowers to the family or plant a tree in memory of Carolyn Burns, please visit our floral store.

Obituary So when this corruptible has put on incorruption, and this mortal has put on immortality, then shall be brought to pass the saying that is written: "Death is swallowed up in victory." "O Death, where is your sting? O grave, where is... View Obituary & Service Information

The family of Carolyn Burns created this Life Tributes page to make it easy to share your memories.

Obituary
So when this corruptible has put on incorruption, and...

Send flowers to the Burns family.